is the founder and Owner of The Show Player Development in Santa Clara, CA.
In addition to running The Show, Coach Hill is currently Head Baseball Coach for Mission Community College. Before moving on to coaching at collegiate level, Bobby was Varsity Head Coach at Los Gatos High School. In 2013, his first season as head coach, Bobby led Los Gatos to first place in their CCS division with a 20-8 overall record. Over the past three years Coach Hill also led his High School/JC summer ball teams to the 2012 Northern California regional championship (16U), in 2013 and 2014 to the Western Region Palomino (19U) playoffs.

Bobby is one of the select few to have grown up in Northern California and played Major League Baseball. In 1996, Bobby was drafted in the fifth round by the Anaheim Angels out of Leland High School in San Jose, CA. Bobby instead chose to attend the University of Miami. While at the University of Miami, he had a .360 average, became and remains Miami’s career stolen base leader (139), is 2nd in runs scored (240), and 3rd in career hit by a pitch. Bobby is also in Miami’s top ten in career hits (253), career walks (166) and reached base in 97 consecutive games. In 1998 he was a member of the U.S. National Team, scored a Miami school record 87 runs and had a .404 batting average. Bobby was privileged to be a part of the 1999 NCAA College World Series helping lead the Hurricanes to their third National Championship.

Bobby played for the Newark Bears of the Atlantic League until he was drafted in the second round and signed by the Chicago Cubs in 2000. While playing with the Chicago Cubs, Bobby was named prospect of the year and made his major league debut in 2002. During his 2006 season, he was selected to play for the Olympic Qualifying Team USA where he led the tournament in hitting with a .522 BA.

As a switch hitting infielder Bobby has a Major League career .262 BA, OBP of .343 and a .985 fielding percentage. Displaying his versatility playing secondbase, shortstop and third base, he achieved success at the Major league level as a starter; utility role player and a pinch hitter that was three hits shy of the Pirates single season pinch-hitting record. Bobby accumulated over seven years of professional baseball experience of which five years are at the major league level. 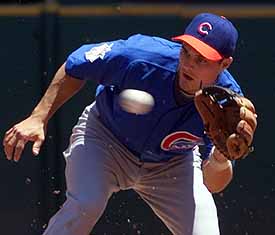